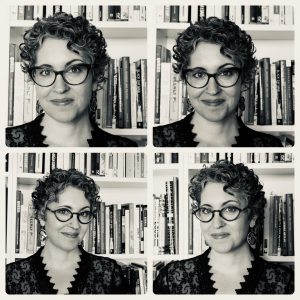 The deets: Assistant Professor of Communication & New Media. Chair of the Communication Program at Chestnut Hill College in Philadelphia, PA.

Current scoop: August 2019 – May 2020 I am the Resident Fulbright U.S. Scholar with the Digital Culture Program at the University of Bergen in Norway. While here I am conducting a study titled: “Your Resistance Has Become Meme.” This research includes a case-study of climate change memes on Instagram to identify the aesthetics of climate change protest and counter-protest memes, as well as the ways in which social media platforms have, to a large extent, homogenized online political discourses, especially in terms of American dominant aesthetics. In a broader context, this is an ongoing project using memetics as an analytic framework to study digital activism practices.

The big picture: This project grows out of my established work on digital everyday activism. My research examines how mundane digital technologies are used to create social awareness, resist socio-cultural and political inequalities, or instigate change through seemingly inconsequential, unorganized participation. The affordances and restraints of digital platforms encourage users to behave in ways that can be vital precursors for social change without being disobedient per se. Users’ online practices are not necessarily civil disobedience in the traditional sense, but may include the flouting of social rules and norms that remains permissible in the scope of the privately-owned public spaces (social media platforms) that make up our contemporary political sphere. That these forms of everyday activism and digital resistance occur within platforms embedded within surveillance capitalism is also central to my work.

What I’m writing: My early work focused on the use of digital media tools to communicate culturally intelligible bisexual identities with the aim of gaining social recognition, often through uncoordinated efforts (e.g., Technologies of Visibility, 2016; The Bisexual Seen, 2017; Representing Bisexuality in the Digital Age, 2018). More recent work has examined issues of visibility through the lens of surveillance, analyzing users practices to gain invisibility from intrusive media technologies (e.g., Recognizing Everyday Activism: Understanding Resistance to Facial Recognition, 2019). My book, Everyday Activism: Technologies of Resistance with coauthor Mathias Klang, will be published by Rowman & Littlefield in June 2020.

How I’m sharing: In addition to traditional academic publications, the outcomes of my research are presented in activist workshops, academic conferences, and incorporated into the classroom.

I have presented my findings around the world, including an invited talk at Sweden’s International Science Festival (Vetenskapsfestivalen). In 2016 I was invited to the White House to participate in a community briefing focused on the cultural and material needs of the American bisexual community as a part of the White House’s LGBT initiative under the Obama administration.

Looking ahead: While in Bergen I hope to regularly publish a research blog on the semiotics of digital protest. I am also avidly documenting my love for Bergen through selfies as @noramonella on Instagram. Check back for more!

Comments are closed, but trackbacks and pingbacks are open.

@cheeflo Excellent point. I will now start to do this.

RT @santiagomayer_: 2020 is so fucking wild that the Pentagon just confirmed UFOs and it’s barely news.

.@facebookapp I am locked out of FB and on some mind numbingly infuriating loop that won't let me regain access. Re… https://t.co/ol7dnCp4ZU

Visit My Profile
Go to top