One of the complications to bisexual visibility is that bisexuality isn’t something we can easily “see” in our culture. For most people, when we see someone and they are alone, we tend to assume they are straight without much intentional thought about the matter. It’s not so much a conscious decision as it is a cultural default. There are certainly exceptions to this rule, but it is common enough. And when we see someone with a romantic partner, we assume they are monosexual (more on that to come in a minute.) And when we see three people together we tend to assume that they are either friends, or one is the friend of a couple. 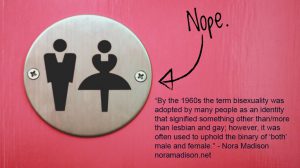 Bisexuality is not a mono sexual identity since, by definition, a bisexual is attracted to more than one sex or gender group.

But that definition of bisexuality does not fully capture the contemporary bisexual identity. The culturally popular definition of bisexuality in Western cultures—romantic attraction, sexual attraction, or sexual behavior towards both males and females—does not actually reflect how the majority of bisexual-people describe their own bisexuality. In popular culture, bisexuality is often thought of as a sexuality situated in the middle of two binaries: on one end are people who desire people of the same sex or gender and on the other end are people who desire people of the “opposite” sex or gender, making someone either straight or gay.  But this popular construction of human sexuality falsely suggests that there are only two kinds of people: males and females, or men and women. This binary reinforces the false idea of only two options: desiring men or desiring women as sexual partners. While the root word bi (=two) suggests the identity is about being attracted to “two”, the “two” that non-bisexuals assume bisexuals are attracted to is not the same “two” that bisexuals themselves explain they are attracted to.

The definition of bisexuality that is most widely adopted by bisexuals today has been put forth by the American national bisexual group, BiNet USA:

“A person whose enduring physical, romantic and/or emotional attraction is to other people of various sexes and/or gender identities. Individuals may experience this attraction in differing ways and degrees over their lifetime.” (BiNet USA)

When defined this way, bisexuality is much broader than a binary two-sex system. Bisexuality as the capacity to be attracted to two much broader categories of people: people who are the “same” as you (in terms of sex or gender) and people who are “different” than your own sex or gender. By saying “different” instead of “opposite”, the bi (or “two-ness”) of bisexuality is not so binaristic.

So bisexuality is not a mono sexual identity and it is often trying to push back against our cultural assumptions of a either/or sex and gender system. But monosexuality identities are easier for us to “see” in our culture, which I will address in tomorrow’s blog.