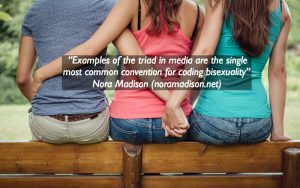 Examples of the triad in media are the single most common convention for coding bisexuality. Take for example the New York Times Magazine article “The Scientific Quest to Prove Bisexuality Exists” published March 20, 2014:

This image – in a prominent mass media publication – depicts a man separated into two halves: in one half, a woman is nuzzled up to his cheek, and the other half a man is nuzzled up to his ear. Presumably the man is bisexual and therefore split into two parts: his heterosexual self and his homosexual self. This visual depiction of bisexuality supports the false notion that bisexuals are torn between two “opposite” desires and they experience equal and constant attraction to both men and women simultaneously. Furthermore, the triad represented in this way suggests that bisexuals have simultaneous liaisons with heterosexual and homosexual partners.

This popular use of the triad is also closely connected with the hyper sexualization of the bisexual. In these cases the triad is commonly presented in varying states of undress and/or in a bed. Many of these images also play on the heterosexual male fantasy of having two female partners simultaneously. For example, the article in The Guardian from March 20, 2014 with the headline: “Make up your mind! The science behind bisexuality.” 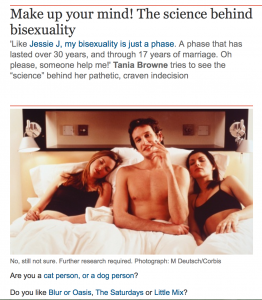 In this image we see three attractive young people sharing a bed. A man is sitting up between two sleeping women and smoking a cigarette – the cigarette suggests to the viewer that the three individuals just had satisfying sex, as does the smile on the man’s face. This may have been a suitable image if the article had been about having a threesome, but the headline—and the article—are attempting to explain the science behind bisexuality. While the image is intended to illustrate an article on bisexuality, the image is fundamentally misleading. The women in the image are asleep and to the side and the man is awake and in the middle. He is the central figure – it is a picture of him. So who is the bisexual in the image? Is he? Are they all? What is the image attempting to do? It seems that the goal is to titillate, to excite, and to satisfy a particularly heterosexual fantasy rather than to discuss the reality of bisexuality. This hypersexualization once again references the mistaken idea (or heterosexual male fantasy) that bisexuality is only expressed through simultaneous sex acts.

Many of these examples are salacious but they occur with surprisingly regularity in the mainstream media. This next image is taken from an article on the website of the American Association of Retired Persons (Febuary 17, 2016) titled: ‘Am I Discovering I’m Bisexual?’ 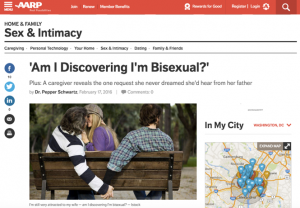 As previously mentioned, images such as these are common and range from the more inoffensive to the salacious. The resulting effects are that we should think of bisexuals as fundamentally torn between their internal hetero and homo desires, requiring simultaneous partners, and completely untrustworthy partners. And what’s more? In all these images it is never clear exactly which individuals are bisexual. Are all three members of the triad bisexual? While this is one possible way to read the image, another way to read what’s going on in these images is to believe that one of person in the triad is the actual bisexual while the others are either just in it for the fun or being deceived.

The most important thing to understand in these popular media representations of bisexuality is that these images were only ever used by out-group, non-bisexual identifying organizations. The use of triads to represent bisexuality is highly disliked and critiqued by bisexuals themselves.

#BiWeek Day 2: What is Monosexuality?
#BiWeek Day 4: What is “inscribing” bisexuality and how does it help achieve bisexual visibility?
Go to top